Warning: count(): Parameter must be an array or an object that implements Countable in /home/customer/www/family.fischer-clarkson.com/public_html/wp-content/plugins/rootspersona/php/class-RP-Persona-Factory.php on line 223 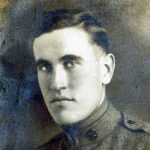 When Paul Joseph Clarkson was born on April 22, 1897, in Littleton, West Virginia, his father, Thomas, and his mother, Sarah, were both 39. His father died of “stone mason’s consumption” at 47, when Paul was just 8 years old. Paul was a self-made man, having left school after the fourth or fifth grade to help support his family.